XBee on the Raspberry Pi

When I first started writing xbee-api in 2007, there were no options for a cost effective, low power host computer with Java support. In 2009 I purchased a Sheevaplug ARM computer and that worked for a while but proved to be problematic: the power supply failed after a year (a known issue), and it experienced periodic boot errors. Last year I received a Raspberry Pi after a long wait, due demand far exceeding supply. 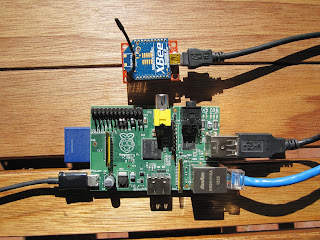 In order to run Java on the the Raspberry Pi it requires the soft-float version of Debian OS, available from the Pi website. Once you get your Pi up and running, you'll need to install the Oracle Java for ARM. I don't recommend openjdk as I found it to be much slower and buggier on ARM.

Update Java8 is available and although it says "jdk" in the name, javac is not present. Choose the following version from the above link:ejdk-8u111-linux-arm-sflt.tar.gz This works on my raspberry pi version 1, model B. This version includes a few binaries, I've been using the first with no issues:

There are several versions of Java for ARM on the Oracle site. The version compatible with the Raspberry Pi is ARMv6/7 Linux - Headless EABI, VFP, SoftFP ABI, Little Endian. The current release as of this writing is ejre-7u21-fcs-b11-linux-arm-vfp-client_headless-04_apr_2013.tar.gz.

Move the gzip file to your Pi and unpack

I installed it in /opt/java

Now you should be able to execute java

Although the Pi has a GPIO serial port that is well suited for XBee, since it runs at 3.3V, I'm using a usb-serial XBee Explorer since I already had this hardware available and the configuration is less complicated. These can be found relatively cheap from Chinese vendors on ebay, or from a local supplier if you need it quicker. I'm using the SparkFun USB Explorer.

Now when you plug your XBee into the Pi, via USB, it should appear as /dev/ttyUSB0 and can be opened with xbee-api

Now, to run your xbee-api application on the Pi, you need to provide a few key arguments to Java.

The -Djava.library.path argument tells Java where to find the native RXTX library (JNI).

If you exported your application from Eclipse into an executable JAR, use "*:/usr/share/java/RXTXcomm.jar" for classpath. This tells Java to load all JAR files in the current directory, in addition to the RXTX JAR. Alternatively, if you copied your Eclipse folder to the Pi, the classfiles are in the bin directory, so use "bin:/usr/share/java/RXTXcomm.jar". Of course replace com.fooYourApp with the package + class name of the main class. It's a good idea to put the full Java command in a script (e.g. myapp.sh). Then make it executable with chmod u+x myapp.sh.

Now modify add the non-root user that you run your apps to the group that owns the device. This is only necessary if you don't run as root:

If you want your app to start every time the Pi boots, add the script to the do_start() function in /etc/init.d/rc.local

I've been running my Garage Door XBee application on the Pi for about 6 months now and it has been very reliable. The only problems I've encountered so far were related to a failing power supply. When the voltage drops below 4.75, mysterious things can start to happen. My power supply dropped to 4.69 and I noticed periodic crashes.

I'm running my Pi with ethernet connectivity. The Pi can use Wifi but due to the limited current supply of the USB port, it only works with a select number of Wifi chips. Perhaps later versions of the Pi will supply more power to the USB to overcome this limitation.

In a future post I'll show how to interface the Pi's GPIO Serial port directly with the XBee UART.